This blog post was authored by Igor Peev, Senior Program Manager who enjoys working on challenging projects that deliver new, innovative ways to analyze data and tell good stories with it. He works on interactive tours to present and play with data in 3D environments.

I am not a big soccer fan. I am not very fond of watching TV, but every four years I can’t help it and get into the World Cup. There is something different about this particular competition, something totally awesome about watching teams from every country try their best to win the Champion Title. Perhaps the universal appeal has to do with the fact that in all parts of the world kids play soccer.  I too played when I was really young. I grew up in a small town in Bulgaria and we played straight on the asphalt street, pausing for the occasional car to pass by.  All we needed was a ball and four cardboard boxes to make goals. I bet that millions of others who watch the World Cup can tell you the same story.

For this tour, I search for some basic data with Microsoft Power Query. I found a table from Wikipedia – Teams Reaching the Top Four – Results – FIFA World Cup which I imported and had to normalize. This is what the table looked like initially: 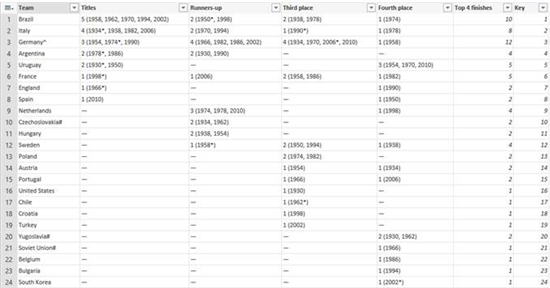 This is how I normalized the above table, granted, there is more than one way to normalize this data: 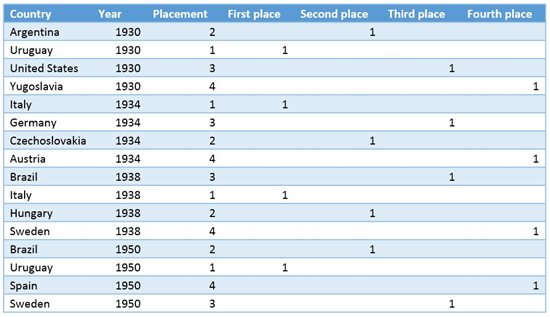 I had to do a few other things: 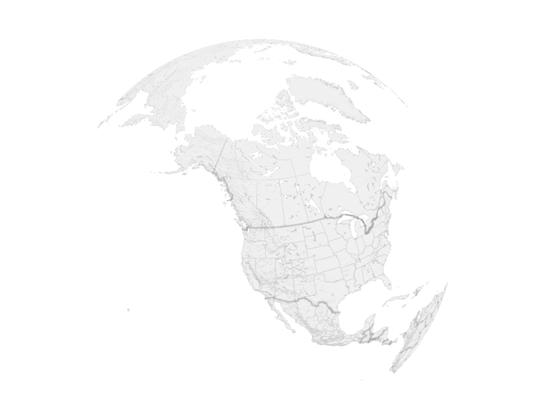 Then I copied that scene and put a text box in it. That way the video will start with a blank globe and then the title appears a couple of seconds later. 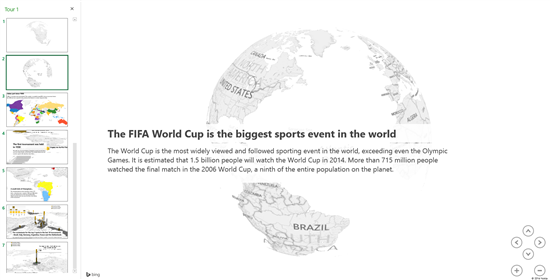 My following scenes followed each logical part of script which told a story from the data above. The story followed the original table which I imported using Power Query and the Wikipedia article on FIFA World Cup. I wanted to show all countries which have been and are in the World Cup. I made a scene for that, and used Category for shading the regions using Region chart and a layer based on the Country column.

After doing this, I made a scene about the first winners in 1930. That scene was shot from the bottom of South America looking north.

Then I made a scene that had all of the countries which have won the World Cup Championship Title. That has 8 countries, some in South America and some in Europe so I positioned the camera over Argentina and set a ‘Fly over’ effect in the scene so that the motion is towards Europe. That way, I can have a smooth transition to the next scene which showed all countries which have won the top three spots in the last 10 World Cup tournaments. I knew from the data in the original table that a lot of these countries were in Europe and I positioned the scene such that you can see Europe best but you can see South America too. 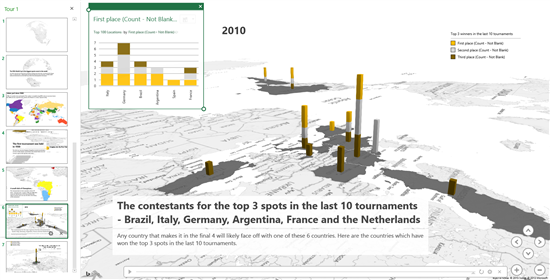 Later, I added another effect and set the Year in the Time well to play in accumulation.

I made all other scenes about the European winners and added shaded regions for each country using the Region Chart type. I put scenes in the same geo locations together so that the camera does not have to travel back and forth too much. As a rule, I position and move the camera in each scene so that it always moves towards the beginning point of the next scene as much as possible. In that manner, the engine which applies the effects and arcs in transition works on both things at the same time and does better interpolation between adjacent scenes.

I did choose a theme with less colors so that the visuals stand out and used monochrome colors for the shading of countries. The final scenes showed all countries who have ever scored a spot in the top 4, over time. I used the ‘First place’, ‘Second’ place columns in the Height field, set to Count Not Blank. For the very last scene I removed the Year from the Time well and added a text box saying ‘Good luck to all teams’ and a few other things.